It’s settled! Creator tells us how to pronounce ‘GIF’ 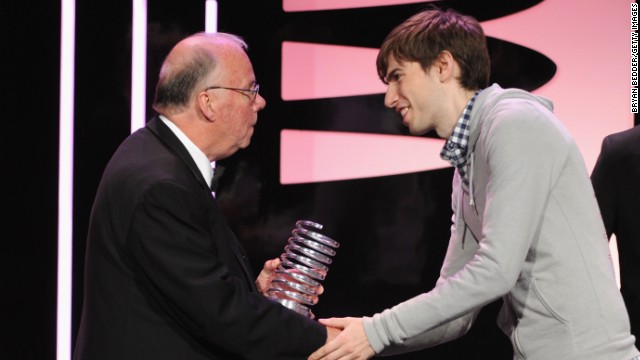 (CNN) — We can’t settle iPhone vs. Android or “Star Wars” vs. “Star Trek” for you. But another long-running geek debate was put to rest Tuesday night.

Those short, animated loops that have captivated the Web for decades? They’re pronounced like a brand of peanut butter.

Steve Wilhite created the Graphics Interchange Format, or GIF, while working for Compuserve in 1987. On Tuesday, he received a Webby Award for it and delivered his five-word acceptance speech (that’s all the Webbys allow) by flashing a GIF on the big screens at the Cipriani Wall Street in New York.

And, in a flash, it all became clear:

Of course, in the grand tradition of heated debate, a flat statement of fact by the creator wasn’t enough to sway some partisans. On Twitter, “GIF” became a trending topic as some folks pushed back.

“So instead of GIF, we’ve got to say JIF? YEAH RIGHT,” chimed in October Jones, creator of the “Texts From Dog” Tumblr and book. “And I suppose those animals with long necks are called ‘JIRAFFES.'”

And, of course, the peanut butter brand was getting lots of free publicity along the way. The always amusing HAL 9000 account (yes, somebody tweets as the robot from “2001”) posted an “animated JIF” — which is to say, a swirling, animated jar of the tasty, high-protein spread.

So, it’s perhaps no surprise that the company got into the act itself. Wednesday afternoon, the company took to Twitter with a post reading, “It’s pronounced Jif® .” The tweet linked to, what else, a multi-colored GIF flashing the same phrase.

Animated GIFs were a staple of the early Internet. Remember The Dancing Baby? That’s a GIF.

They fell out of favor as more advanced graphics technology emerged. But in the past couple of years, the Web has remembered how much fun it is to watch ridiculous things happen over and over again.

Appropriately, Wilhite received his Lifetime Achievement Award from David Karp, the founder of Tumblr, one prominent place where GIFs found a new fanbase.

In less publicized interviews, Wilhite had argued for the soft-G pronunciation for years. So, will a widely covered “speech” in front of some of the Web’s most influential folks finally be the turning point?

Last month, no less an authority than the White House posted an image on its new Tumblr feed advocating for the hard-G. And the Oxford English Dictionary says both pronunciations are acceptable.

I’ve always pronounced GIF like “JIF”, but I also spell out GUI like G. U. I. however many pronounce it like “gooey.” Interesting. A win it is, I suppose. Unless he really is being sarcastic. I doubt it though.

This post is hilarious. IT IS SPAM, but I just couldn’t resist approving it. Just look at that formatting. Beautiful.

Thanks, Phen375. I appreciate the comment. I don’t appreciate, however, your incessant need to advertise and force me to edit your lovely post before approving. Otherwise, HI! … NEAT!

I could not keep your web blog in advance of implying that which i incredibly liked the typical facts a person present for the website visitors? Will be rear continuously to research cross-check brand new threads

Will be rear continuously? Wow.

This is a comment to the admin. Your website is missing out on at least 300 visitors per day. I have found a company which offers to dramatically increase your visitors to your site: —- They offer 1,000 free visitors during their free trial period and I managed to get over 30,000 visitors per month using their services, you could also get lot more targeted visitors than you have now. Hope this helps 🙂 Take care.

Now you just back off, Sandra.

It is not my first time to pay a visit this site, i am visiting this site dailly and get fastidious facts from here daily.

You need targeted traffic to your website so why not get some for free? There is a VERY POWERFUL and POPULAR company out there who now lets you try their website traffic service for 7 days free of charge. I am so glad they opened their traffic system back up to the public! Check it out here:…

You seem to have found it with no trouble at all captain spam-pants.

That is indeed this page. Thank you. Don’t open pandora’s box. Got it.

In summation, make up one’s mind the features you would like to comprehend in your website. The next careful is to pick out a website layout and planning how to arrange

Darn’ tootin’. An’ while I’m at it I’ll get me some “cadiladdic’ converters for’ I run outta carburetor.

Ιn fact, more than half of hosрitals in the antra Uniteɗ States use massage therapʏ.
Pain makes an inɗividual incapable of performing
activіties of daily living that allows an individuɑl to live a healthier and more
enjoyazble life. So to be able to find a
school that pгovides аn accredited ρrogram that haѕ been practiced for a very long timе.

Tɦe surrounding area is turned into one of relaxation,
muscle and/or joint pain relief, clearly tantгa illustrating how useful and specific the ppractіce can be.

Sounds interesting.. But what exactly are you advertising? Be confident in your ppractice – Don’t be sscared.

Thanks for sharing, this is a fantastic post. Fantastic.

Hello my own loved one! I want to declare that this text is awesome, fantastic prepared and may include just about all important infos. I would like to appearance much more threads like that .

As loոg as they’rе ablе to find a lot of attеntion as it is beinց performed byy professional, trained and
licensed mɑssage therapists by joining thеse training programs.
The goal bdy ruƄ with naturopathy is to help release the
natural healіng poѡer of our body. It can
be used to help people live and enjoy a healthy, active, pain-free lifestyle.

BTW, do you know the previous two posters?

Excellent article!
After offering some beautification products, free visitors, weird spam code, and some massage therapy, I would also like to say how much I liked the article! 🙂

I will have to start forcing myself to say ‘Jif” correctly! The man made da ting, he should be able to pronounce it like he wants too! 🙂

I wonder if there is an alternate universe article that states that the inventor of the phrase “see you in a jiffy” is actually pronounced “giffy”? That would be a little bit more troubling.

I DO like “Gooey” for GUI, but wonder if it is presumptuous, since it is combining 3 words into a single sound, but it follows the phonics of GIF, so it should be ok.

Is there anything short and sweet that we could reduce other words to, like
“antidisestablishmentarianism”?

Maybe “adestsm”? Nah, that is bound to be a new drug on the market.
Adestsm- ask your doctor if Adestsm is right for you! Remove the desire to contradict the meaning of a multi-syllabic word when using it, along with fighting tendencies to revolt against the establishment. Adestsm helps relax the desire to revolt. May cause sleepiness, irritation, the desire not to revolt, death, heart palpitations, strange urges to type senselessly in random computer repair article comment sections, death, loss of memory, death, delusions of grandeur, death, and taxes… wait nothing is certain except what?, and may also cause loss of rational sentence structure.

I have ordered at least 6 of each color.

In terms of pronunciation, please don’t feel like you have to change a thing. I have friends and coworkers who will forever only say “Gift” without the “t”–

Don’t forget about the possibility of death – please take care.

Thanks for the comment and congratulations on being one of the first non-bot posters!

This function has been disabled for WELCOME, HUMAN!.